Yesterday, I and my friends gathered at my apartment for another D&D session. The party was fresh-off of killing their first dragon and were riding high as they adventured into an underwater temple. To shake their newfound egos, I (the DM) decided to put them up against a brutal double-battle. After defeating the guardians of this ancient temple, a trio of Chuul, they were confronted by a group of Drow Elves who sought to take to the treasure for themselves. The battle was brutal, nearly resulting in the death of the group’s paladin and cleric and forcing the rogue to push himself harder than he ever had before. But in the end, they managed to just barely escape with their lives and the treasure.

It was a ton of fun! Both the players and I went back-and-forth, rolling high and low. I rolled two consecutive natural twenties, which resulted in a brutal beat-down for the rogue, and they rolled numerous consecutive natural ones, which resulted in hilarious accidents for everyone! The fight was a brutal tug-of-war that pushed them to their limits and forced them to use creative and desperate tactics! It was a story that I’d be thrilled to tell again, one that I’ll bring up when I mention why I love Dungeons and Dragons!

But I hear you asking why this matters. Why am I wasting your time on a movie day by telling you a D&D story? Well, you’ll understand why in a bit. But first, let me explain why this article exists in the first place.

Before the whole group arrived, two of the other guys and I sat around and hung out for a bit. In the conversation, I brought up the old D&D movie from 2000, the one with Jeremy Irons as the villain. I had forgotten his name, so I looked up the cast on IMDb. In the process, I made a few discoveries. One, there were actually three D&D movies, with the other two being direct-to-TV films. Two… that there’s going to be a fourth D&D movie coming out next year! 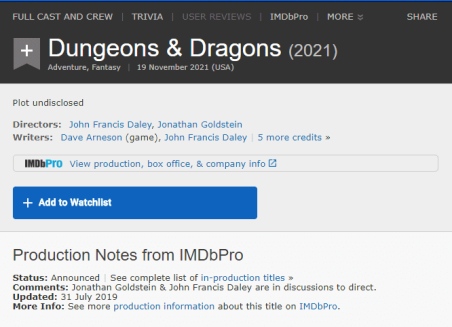 Initially, I was very confused by this discovery. Why would they do that? What is the story going to be? Who thought that making another D&D movie would be a good idea, considering the failure of the first one (and that the other two flew completely under the radar)?!

But the more I thought about it, the more it made sense. D&D has had a huge surge in popularity in recent years! Shows like Critical Role have brought the table-top hobby to the mainstream! It’s easier to play than ever thanks to 5th Edition! Plenty of books, both official and home-made, come out every year! This complex but incredibly fun tabletop RPG has become a majorly popular game! Why wouldn’t Hollywood try to capitalize on it?

But here’s the thing about Dungeons and Dragons. It is the ultimate free-form storytelling game. No two campaigns will ever be the same! The only limit is the imagination of the DM and the players!

So how the fuck do you write a story out of that?!

This is the double-edged sword of a D&D movie. On one hand, you have the ultimate creative freedom! If the only limit to D&D is the imagination, the only limit to a movie adaption would be the same! You could do pretty much whatever you want with this movie!

But here’s the thing. If you do that, you’ll only end up with a generic fantasy movie! You won’t have those charming little moments that make D&D so magical! You won’t have that moment where a player comes up with a bat-shit crazy solution that seems like it would never work but totally does thanks to a miracle of the dice! You can’t have that unpredictability that puts every DM on the edge of their seat! You’ll miss out on those hilarious little moments where the players do something small and insignificant that’s rewarding in its own way!

That’s why I don’t think D&D movies should be a thing. They can’t capture the charm that the game has that makes it so unique and wonderful! You could make movies about D&D, like a documentary about the game’s history (I’d actually kill to watch that), or you could incorporate it as a small piece of a larger story ala Stranger Things! But making an original movie out of Dungeons and Dragons? You can’t really do that!

Now, I can already hear your argument. The movie doesn’t come out until late next year! Hell, it might not come out until even later! We don’t know anything about it aside from who is writing and directing it and the fact that it exists! It’s still far too early to judge!

You’re absolutely right. Maybe I’ll be wrong, as I so often am, and they’ll somehow make a fantastic D&D movie. It might even be that documentary I want so badly! For all we know, this will be the greatest movie ever made!

Or it’ll be a live-action remake of the D&D cartoon from the ’80s. Which would also be amazing.

But I do want to air my concerns about this film. Despite its surge in popularity, D&D is still very alien to a lot of people! I’ve talked to countless people that have heard of it but have no idea what the game is about! And this movie could, if done poorly, hurt the perception of the game! Just like a bad book-to-film adaptation could drive people away from the original work, this movie could drive people away from ever trying D&D!

That’s the thing that I’m most scared of! I love this game and I’ve tried my damndest to spread that love! I’ve become the forever-DM in my circle of friends because I’m the guy that’s always screaming about how great this game is and encouraging people to play it! I want people to experience this game because I genuinely believe that it’s the most fun you could ever have with a tabletop game and your friends!

Again: I could be worrying about nothing! The movie is nowhere close to being released yet. But you can be damn well sure that I’ll be keeping a close eye on it! Whether it succeeds or fails, I will be there to witness it!

And to do damage control if it’s as bad as I fear it’ll be.

2 thoughts on “On Making a Dungeons and Dragons Movie”