If you haven’t read my first Bone Collection review, you should probably do that before this one. I won’t be going over any of the details here that I discussed there. I’ll leave a link right here.

All caught up? Good! Then let’s get started!

I’m back for another five chapters of Bone Collection! So, how’s the little Shounen that maybe can, we’ll see? Well, it’s… pretty good! Except for a few things.

The story goes to some bizarre places in these chapters. Chapters 6-8 focus on the story of Bay, one of Paira’s Yokai friends who came to the human world. Chapter 9 is a one-off story, focused on a friendly Yokai and a corrupt Exorcist. Chapter 10 marks the beginning of a new arc, which I shall dub the Yokai Prison arc until further notice.

Honestly, chapters 6-9 (heh) are… not terrible, persay, but they’re also not spectacular. The actual fight is extremely short and uninteresting, though the artwork is still great, and the finale is just okay. It is a super predictable and pretty meh little story.

Though, to be fair, it does address one of the issues I had in the last review: it has an actually unique and fun monster design! Just look at this guy! Compared to the generic trash we’ve gotten so far, it’s a huge breath of fresh air! 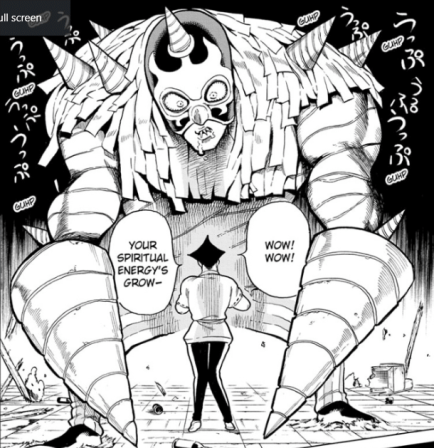 That’s such a fun design! Unfortunately, chapter 9 wouldn’t follow up on that. The monster of that chapter is so generic looking and boring that I won’t even bother showing you the panel. It sucks.

But to be fair: that makes this guy all the more fun and cool!

These chapters also do a lot to flesh out Kazami and Paira’s powers. In order to fully draw out the power of her bones, both Kazami and Paira must be in sync in goals and emotions. That’s cliche, sure, but it makes sense given the context of their powers. Plus, it could lead to some decently effective drama later down the line.

But the biggest thing that happens in these chapters, specifically chapter 8, is the establishment of what is highly likely to be our main villain!

If he looks half as cool as that artwork makes him out to be, then this dude is gonna be awesome! Hopefully Jun Kirarazaka can give him a great personality to match. If all goes well, we could have yet another wonderful Shounen bad guy!

Still, we don’t know anything about this dude yet. Literally all we know is that he is called ‘The Great Tengu’ and that he’s an important creature. At this moment, he could either turn out great or he could be really boring. Only time will tell.

But god dammit, that panel gives me hope! That’s such a cool drawing, dude!

The ending of this arc is pretty bland. Granted, it fits within the tone of the story and it is kind of cute. But on a writing front, I do think there should’ve been more here. If this arc were a few chapters longer, that ending would’ve been far more satisfying. Though I don’t hate it enough to knock any more points off of it. Maybe I’m just nitpicking, I don’t know.

Though it does give Kazami a pretty cool hero moment. Simple and cliche, yeah. But that’s not bad.

Story wise, chapter 9 felt like a distinct waste of time. The story, while sweet, is pretty boring and uninteresting. Thankfully, it’s quickly paced, so it doesn’t last more than one chapter. Honestly, there are only two things I can say about this one that are positive.

One: look at this adorable little Yokai! 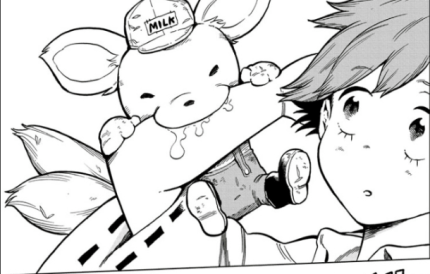 His name is Milkboy and if anything bad had happened to him, I’d murder everyone in my apartment complex, all the neighboring buildings, and then myself.

Two, this chapter does something super important: it gives Kazami a goal. See, this chapter establishes the Four Exorcist Kings, the leaders of the Exorcists. They decide what happens to the Yokai, deeming whether or not they’re harmless enough to stay or need to be exterminated. Kazami, wanting to bring human and Yokai closer together peacefully, decides that he wants to become one of these kings.

That’s right! We’ve got yet another Shounen hero aiming to become a king!

Alright, I’m done. Let’s talk about Chapter 10 because that shit is awesome.

Chapter 10 gives me a lot of hope for what we could get in the future. Not only does it do some cool world-building, but it also perfectly sets the stage for what could be a super exciting Shounen battle arc! There’s a lot to talk about here! 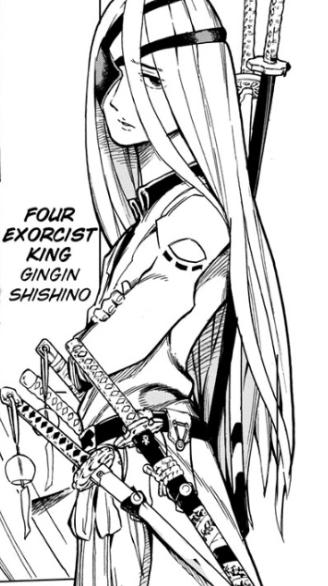 For one: we meet another of the Four Kings. And… yeah, I don’t like this character. His only real traits are ‘is paranoid, adds ‘samurai’ to every single sentence out of his fucking mouth’. Sure, he looks cool! But when I’m already sick of his gag not even a chapter after he was introduced, we’ve got a bit of a problem!

Thankfully, he’s not the only new character introduced. There’s also Hayami, the prettiest girl at Kazami’s school and a secret Exorcist. How she’ll play into the arc to come isn’t super clear right now. But I’ve got an open mind. Maybe she’ll be awesome, I dunno!

The other two are San and Runa, a pair of twins that work for Akifuyu (Kazami and Paira’s boss, who protects them and lets them use the forbidden Yokai Spell despite the rules). Not only are they extremely powerful but they actually use the Yokai Spell themselves! They’re role in this arc is made clear almost right off the bat: they will train our heroes in properly using the spell and become stronger. 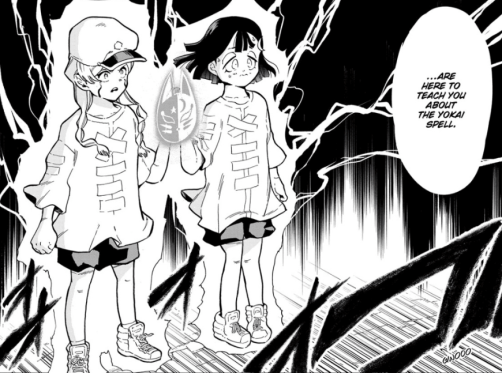 Also, I love their designs. They’re cute, but you can tell that they’re pretty badass. Is that panel above not enough for you? How about this one? 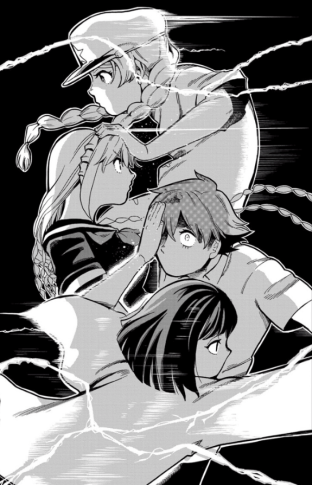 I don’t know why, I just think that drawing is super fucking sick.

It isn’t just characters that are introduced here. This chapter also decides to flesh out the world! Primarily with the central focus of this arc: Yokai Prison Island. A place where high-level Yokai are captured, studied, and experimented on. That’s right! Exorcits aren’t just mindless killing machines!

Despite what you might pick up from the previous chapters. Considering that Kazami is the only one we’ve seen that doesn’t immediately leap into ‘Murder Mode’.

Plus, it leads directly into the introduction of this arc’s villain! Who is only shown in silhouette with the narrator introducing him. Not the most interesting villain introduction of all time. In fact, I’d argue that it’s downright bad. But you know what? Maybe he’ll be properly introduced in a more engaging way down the line.

All in all, chapter 10 definitely had some problems. But it was still enough to get me excited for the arc to come! We’re (hopefully) gonna get some cool Shounen training and awesome fights! For fuck’s sake, they’re going to a prison island filled with powerful Yokai! Not having them fight a bunch of rad monsters would be a total waste!

Overall, I can’t say this batch was as good as chapters 1-5. Still, it was pretty fun! The gags are still funny and the artwork is as great as ever! Sure, the writing definitely has its ups and downs. But none of it is so bad that it shakes me off the series. I’m still eager to see where this story goes!

But if that fucker says samurai one more fucking time, I swear to God-