*WARNING!! There is going to be a hefty number of spoilers in the review ahead! If you’re even remotely curious about this series, I’d recommend reading the first few chapters before this. You’ve been warned.*

As long as I’ve been an anime fan, I’ve always been behind the curve. The shows I liked were already well ahead of me and their respective manga were even further, if not already done. There have been a few times I’ve managed to catch up and stay that way. But I’ve never been with a series from the beginning of its run.

Enter Bone Collection, a brand new series in Shounen Jump. I stumbled into this while added manga to my read list on Viz (not sponsored), and decided to give it a chance. It looked like a weird bit of Shounen fun, so why the hell not? Maybe I can be one of those unbearable assholes later down the line and claim I liked it before it got popular.

Whether or not I’ll be able to do that still remains to be seen. As of me writing this, the series is only in Chapter 5. The story has got a long way to go. But the question is: have I been impressed so far? Is this new manga series any good?

Yes! But also no.

Story: Breaking All the Rules Just to Touch Boobs

Our tale takes place in modern-day Japan, where Yokai attacks are a common event. Just as common are Exorcists, warriors who use spiritual energy to fight the Yokai off with magic. That’s our basic premise: a war between Exorcists and Yokai. And god damn is it incredibly basic. 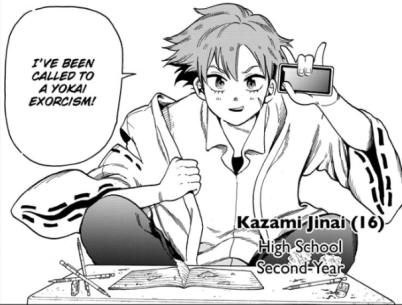 The hero of this story is Jinai Kazami, the youngest son of the Kazami Exorcist family. He’s a normal high school boy; he’s got a heart of gold, likes cute girls and big boobs (primarily the ladder), and wants to do his best to live up to everyone’s expectations. Unfortunately, their expectations of him are super low, because he’s kind of the worst Exorcist ever. His only talent is in the Yokai spell, a forbidden ability that lets him harness the powers of the very enemies they fight. If he ever uses it, he would be executed by the higher-ups.

One day, after a humiliating failure, he watches a Yokai gate open and drop an unconscious girl, seemingly out of nowhere. This is Paira, a bizarre but pretty girl (with big boobs; the writer really wants you to know that she has big boobs) that turns out to be a Yokai named Gasha Dokuro, an SSS Rank Yokai. When an A Rank attacks, Kazami uses the forbidden spell to power her powers and fight him off.

Together, they strike a deal. Paira wants to be human, and the only way to do that is for Kazami to use all of her bones and exhaust her Yokai powers. Kazami, despite knowing the risks of using that spell, agrees. Together, they must defeat Yokai while avoiding the attention of other Exorcists.

All of that is established in the first two chapters. Don’t worry; it’s paced much better in the actual manga than in my three-paragraph summary. I kind of got carried away.

I really like this premise. It’s exceptionally simple, but it’s really well executed! I’m always a sucker for a good tag-team, and so far this manga hasn’t disappointed! It’s been pretty fun! Albeit incredibly weird and kind of stupid.

Let’s start with the positives: I really like Kazami and Paira. The two have great character designs, their personalities and goals are communicated clearly in an interesting manner, and most importantly of all: they have phenomenal chemistry! Each interaction they share is a delight! Paira is the stronger of the pair, as she has a more fun personality and a more compelling motivation. Kazami is a bit boring, but he’s likable enough to get away with it. 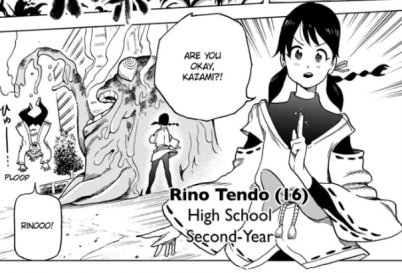 The side characters are… mixed. I really like Rino, Kazami’s childhood friend; she’s an interesting take on the cliche and she has some great chemistry with both Kazami and Paira. I also enjoy Akifuya Abe, who just got introduced; not only do they have some weird and fun powers (which I desperately want to see more of in the future), but they genuinely took me by surprise by subverting a cliche I was very much expecting to happen. It wasn’t much, but it was enough to make me nod and mutter “Well played.”

The others, though, haven’t been all that great. Kazami’s dad is a generic concerned father and his brother is a condescending asshole who… wears a girl’s swimsuit under his clothes? For no currently disclosed reason?

You know, it didn’t really settle in just how weird that shit is until I actually wrote it down.

I guess this would be a good time to talk about the tone. This is a fairly upbeat, fun story. It has a few gruesome moments and some hints at some dark story threads, but all in all its pretty goofy. Some of the gags make me roll my eyes while some of them are genuinely funny! To my surprise, I actually found myself laughing quite a lot, which doesn’t happen very often! 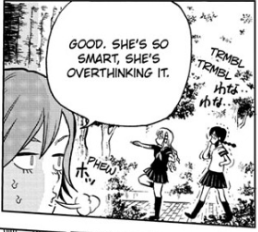 There are two things here that I can’t stand. One: the setting is boring. Since everyone is so used to Yokai and Exorcists that it’s completely mundane in-canon, it can be kind of hard to be interested. Seriously, at the end of the first chapter, when a Yokai shows up, everyone just looks at it like a fucking pigeon and waits for an Exorcist to appear; they only start screaming when it starts preying on girls. I know it’s really cliche for the ‘secret organization that fights the supernatural’, but it’s commonly used for a reason; it creates easy, fun, and compelling drama. 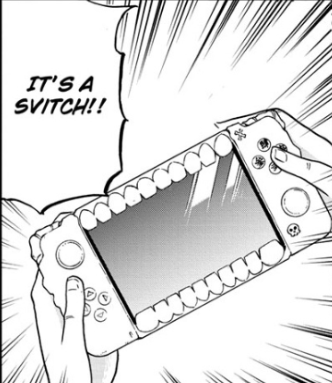 Also, there’s a lot of product placement. That Yokai I just mentioned cites fucking Yahoo Answers when he explains why he came there. In Chapter 3, Kazami pulls a fucking Nintendo Switch (they call it a Svitch, but come on; let’s not kid ourselves here) out of Paira’s fourth left rib! They even name-drop Smash Bros in that same fucking scene! I get that this isn’t uncommon for manga to do, but it’s really noticeable and annoying in this case!

Still, despite my extensive problems with it, I can’t deny that the story has been pretty fun so far! Kazami and Paira carry the whole thing (though Rino does pull her weight), but to be fair: it’s only five chapters in! It’s still at the starting line! Is it amazing? Not yet. But it definitely has potential.

Presentation: Easy on the Eyes

To start this segment off, I want to draw a quick comparison. In my previous forays into manga discussions, I’ve talked about good panel structure. However, explaining it can be a little difficult with only words; manga are based on drawings, after all. So, I’d like to show you an example of what I mean.

First, let’s look at bad panel structure. Here’s a random page of the Dragon Ball Super manga. Be warned: you might get a headache just looking at it. 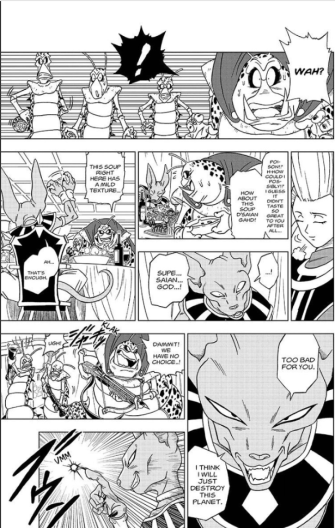 You’ll notice a few things. One: it is way too cramped! There are too many panels, leaving little room for the actual dialogue. If you want to know what the characters are saying, you’ll need to put on your reading glasses and squint super hard. I hope you’re reading it digitally, with a zoom function; otherwise, you’re fucked.

Second: look at the structure. Particularly in the four panels below the first one. At first glance, it can be difficult to discern which panel is supposed to come next. Do you look at the one with Beerus and the weird alien dude? Or the one with Beerus alone? The dialogue does help alleviate it in this case. But that goes back to problem number one: since the page is so cramped, there’s so little room for the actual text!

Now, the artwork itself is fine. But, much like the text, it’s so cramped that it’s hard to appreciate. The first four panels alone could, with a little expanding, fill a whole page much more comfortably!

And you know what’s really frightening? That’s one of the better pages!

This is a perfect example of a bad manga page. It’s cramped, it’s hard to follow, and it hurts your eyes. Word to the wise for aspiring comic artists: avoid making pages like this like the plague!

Now, look at these pages from Bone Collection. 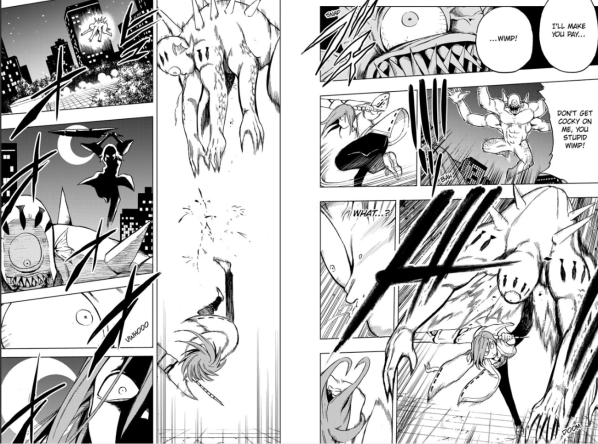 Notice how much easier this is on your eyes. The panels are much bigger, giving both the artwork and dialogue much more room to breath; this makes it much easier for the reader to follow. They’re also structured in a much more credible format; look at the bottom three panels on the right-hand page. Your eyes naturally drift from the biggest panel to the smallest; the art naturally leads your eyes across the page, making it super easy to read.

The action artwork is also phenomenal! Each drawing leads into the next, making it perfectly easy to tell exactly what’s happening! You can see the Yokai leap into the air, Kazami wind up for a reverse-kick, knock him back in the air, then follow after him. It’s clear, concise, and easy to read. Plus, the artwork itself is amazing! 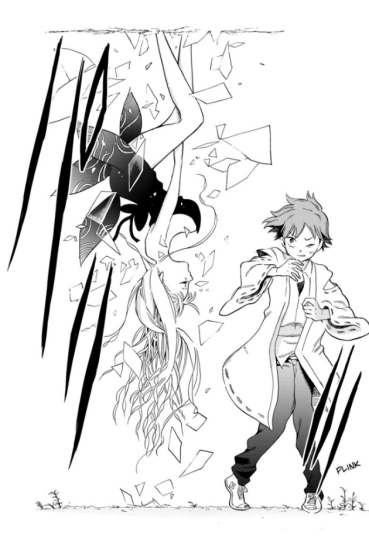 On a visual front, this manga is great! The artwork is effective, with a distinctive and appealing style. All the character designs are amazing, all except for the Yokai, which look pretty generic and boring so far. It’s a great looking series! I only wish the enemies looked more interesting.

I really hope to see an anime adaptation in the future. Because god damn, that could look amazing! If the right studio worked on it, it could become a true phenomenon!

Then I could really be that guy! And better yet: I’d have this article as evidence! Hooray! I’ll be insufferable if this series makes it big!

But once again: only time will tell.

Five chapters in and Bone Collection has made a pretty decent impression. It’s weird, not all of the jokes land, the setting is weak, and the story hasn’t really gotten any momentum yet. But the main characters are so charming and the artwork is so good that I can’t help but hope!

So, despite my grievances, I’m going to keep up with it! I want to see where this series goes! Will it become a new Shounen juggernaut? A cult classic? Or will my excitement ultimately be wasted? Let’s find out together!

I’m going to start a little pet project with this series. Every month or so, I’m going to check back in on Bone Collection. I’ll be discussing how the story and artwork has changed, for better or for worse, as time progresses. Maybe I’ll keep going until it ends! Or maybe I’ll drop off partway through.

Or maybe I’ll stop blogging by then. It is a Shounen Jump series, after all. For all I know, it might be another One Piece and never end.

After all, the Kazami needs to use all of Paira’s bones. And there are… 206 bones in a human body? At least?