Ah, the Doppelganger. A fantasy classic. Of course it would appear in Dungeons and Dragons!

Unfortunately, that’s what scares me. When it comes to typical fantasy monsters in D&D, they end up being kind of boring. The Cyclops, the Centaur, Dinosaurs (those ones were real, but you get my point), all of these classic creatures ended up being a huge disappointment. The question is: will the Doppelganger prove to be more of the same? Or will it break the mold by forging its own identity within the world’s greatest role playing game?

My expectations are low. But I’m willing to be surprised! So, let’s get started!

God damn, there is a lot more here than I thought there’d be!

If you don’t know what a Doppelganger is, let me explain. These creatures are shapeshifters, devious creatures that take on the appearances of other humanoids. They do this to throw off pursuers, lure victims away, or to carry out any number of plots. However, their ability isn’t all powerful. Language, mannerisms, memories, personalities, and secrets cannot be copied. As such, a Doppelganger must observe their subject for a long time in order to properly mimic them, lest they risk being caught in the act.

Typically, a Doppelganger will either work alone or in a small group with others of its kind. They’ll perform simple cons, like transforming into noblemen and their families in order to live off of their riches, or turning into handsome men to sleep with women. Should a Doppelganger child be born, they will be left alone by their parent and grow up unaware of their abilities until adolescence. When that time comes, they’ll be compelled to seek out their own kind.

Surprisingly enough, you can do a lot with that for a storyline! Perhaps the party meets a young Doppelganger and can choose to help it find its true family. Or maybe the main villain of the campaign is a troublesome noble who turns out to be a Doppelganger drunk on power! Maybe an NPC they’ve been friends with for ages is suddenly replaced by one and they need to figure it out and save them! There are a ton of possibilities here, all of them fun and interesting! These guys are filled with potential, top to bottom!

Alright, off to a strong start. Can it keep the momentum up?

Design: Are they from space?

Seriously, why does this fucker look like an alien? 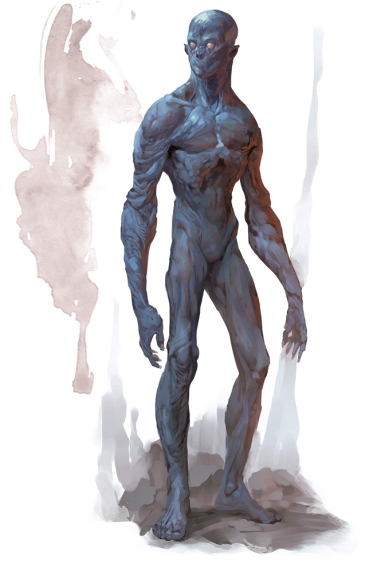 This is certainly a unique design. Mainly because most fantasy stories don’t reveal the Doppelganger’s true form. Some do, yes. But compared to a monster like the Cyclops or a dragon, there was a lot more room for experimentation with this one.

It isn’t half-bad, either. Sure, you won’t be able to figure out what it is at a glance. But given the clay-like texture of its body and its blank features, it isn’t totally unreasonable to think “Yeah, that’s probably a shape-shifter of some kind.”

That, or my imagination is doing more work than the drawing. It can be hard to tell, these days.

Still, the chances are low of you actually using this design in-game. At best, you’d use it to describe a corpse. So, ultimately, I can’t really decide whether or not I should even be judging this design. If you’re gonna use a Doppelganger, he’s gonna look like somebody else for literally every appearance.

That means all the work is on you. Good luck, DM.

Stats: I am Thou, Thou art Dead

Alright, final hurdle. Can it stick the landing?

In terms of numbers, this one isn’t all that intimidating. The AC and HP aren’t all that high, which makes it fairly easy to kill. Granted, you can’t charm it. So… that’s off the table. But aside from that, you won’t have much trouble beating the bastard to death. Especially since it can only deal a measly 1d6+4 per attack.

It’s in the abilities that make this thing trickier to kill. With Shapechanger, it can take on any small or medium form, though it can’t copy stats, abilities, or weapons. With Ambusher, it gains advantage if it surprises any creature in combat. Surprise Attack builds on that, adding an extra 10(3d6) damage to the blow, making up for the lackluster numbers from earlier.

Then there’s the final ability, Read Thoughts. This one isn’t all that dangerous. If it gets a lock on your thoughts, it’ll have advantage on all wisdom and charisma rolls against that particular target. Useful against magic users. Not so much against everyone else.

Looking at these, it’s clear that the Doppelganger’s strengths are found more in storytelling than combat. Because in an actual fight, it will neither prove interesting, nor difficult. You can murder it pretty quickly, regardless of your level. With the aforementioned abilities, you can certainly make it trickier. That, or you can add some interesting narrative elements to the fight. But the battle itself won’t be all that memorable or fun.

Make sure you know your player’s backstory. That way, you can really fuck with them.

Alright, I admit it. This guy is way cooler than I thought it would be. The lore is interesting, the design is… kind of pointless, but it’s cool! The only really strong aspect is the fight itself. Unfortunately, that’s kind of a big one.

Friendly reminder that Dungeons and Dragons is a game, not a novelist’s tool kit.

With all that in mind, let’s put the Doppelganger on the Best of the Bestiary!

Placing this son of a bitch was tricky as hell. Ultimately, I decided that the strong lore and decent design earned it a place higher up on the list. But the forgettable encounter keeps it from the top.

And now, if you’ll excuse me. I’m going to be in Dragon territory for the next year. Or two. There are a lot of these fuckers and a lot of lore to go with them.

Well, I guess I can’t complain. It is Dungeons and Dragons, after all.