We’re starting to climb up the ranks of the Nine Hells! Starting with the first truly deadly denizen: the Chain Devil. AKA: the Kyton.

Chain Devils are the jailers of the Nine Hells, serving as the ultimate torturer. They’re often called upon by the higher-ups to torment mortal souls with horrendous fury. And… that’s it. That’s all their lore. They’re jailers and torturers.

Wow. That’s… super weak! I don’t even have a joke! Let’s just move on.

Don’t even argue with me that it’s not. This thing is literally described as the torture master of Hell! Take a look for yourself! 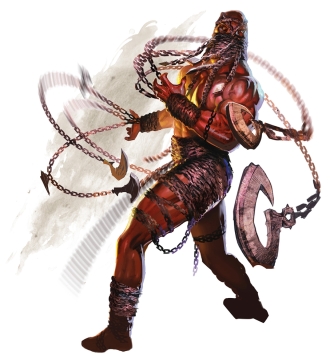 This design is simple and highly effective! The titular chains immediately draw the eyes and their twisting, seemingly gravity-defying nature hints at their magical abilities. Plus, if you look closely, you can see that each chain bears a differently shaped blade, a nice nod at their ability to transform.

The devil themself also looks pretty unique! The dark red skin and muscular body immediately communicate two things to you: this thing is a clear denizen of Hell, and a strong one at that. The shroud of chains around its face is not only a creative way to make it look more interesting, but it also helps create an air of mystery to it! What horrors are hidden beneath that veil of chains? It’s a nice little hint at one of it’s main abilities!

Compared to many of D&D’s most iconic monsters, it isn’t the most interesting. But that doesn’t make it a bad looking creature! It’s still really damn cool!

But can it hold its own in a fight?

Stats: I WONDER WHAT IT DOES?!

Take a guess. I’m sure you’ll have a hard time.

This thing isn’t a bulky motherfucker. The AC is high, but not unbearably so, and it isn’t quite at the triple-digit range with HP. It does, however, have the typical devilish resistances, which makes it a bit harder to kill. But that isn’t the challenge.

This guy is an attacker, plain and simple! It can strike twice with its chains per turn. Each individual blow can deal 11(2d6+4) slashing damage. Worse yet, if you fail a subsequent grapple check, you’ll be restrained. If that happens, you’ll take an extra 7(2d6) piercing damage at the start of every turn. If you don’t break out soon, you can find yourself in some serious trouble seriously quickly!

And then there’s its next and most powerful ability: Animate Chains. With this, it can bring four chains within sight to life, acting as additional weapons. Each animated chain has a high AC and low HP. Worse yet, each animated chain gives the Chain Devil another attack, bringing its two attacks up to six.

Remember that mask I mentioned earlier? Well, as it turns out, it also works for its final ability: Unnerving Mask. With this, the Devil can cast an illusion of one target’s deceased loved ones or a bitter enemy. If they then fail a saving throw, they will be frightened until the end of the Devil’s next turn.

Put all this together and you can have an amazing fight! How will the players handle the Unnerving Mask? Can they keep up with the animated chains?  Will they be able to endure the extra chain damage? This could make for a stressful, intense battle that will stick with your players for ages!

Or you could keep them enchained in a dungeon forever. That’s an option.

The Chain Devil is a pretty cool monster! Sure, the lore behind it is so sparse that it basically doesn’t exist! But that’s made up for by an excellent design and amazing combative abilities! The only problem is that it can be difficult to apply in a game beyond a Devil-themed campaign.

With all that in mind, let’s put the Chain Devil on the Best of the Bestiary!