I’m finally done. At long last. We’re finally making our way out of the Abyss! I finally get to see the light again!

Out of all the demonic flavor text I’ve critiqued thus far, the Yochlol’s is likely the most specific. They bear the title of Handmaiden of Lolth, serving as the spider queen’s spies, taskmasters, and so on. They attend their goddess in the Demonweb Pits, but she often dispatches Yochlols to the Material Plane in order to guard her temples and aid her most devout priestesses. They don’t form in any other plane and serve no one aside from their goddess. When they’re outside of the Abyss, they can assume the form of a female drow or a monstrous spider to hide its true, slime-like form.

There’s actually a fair amount that you could do with that. However, the possibilities are all very specific. I hope you want to use Lolth as your villain! Or maybe as an uneasy ally against another demonic force! Because if you like either possibility, you could do a lot with a Yochlol! But if you don’t want Lolth in your campaign at all, maybe it’d be best to put the Yochlol away with it.

I like this monster’s lore. It’s limited, but you can do plenty with it. Still, this creature will be far from the top of my ‘To Use Next’ list for any campaign.

I legitimately thought this thing was a demon tree before I read the flavor text. I thought it was all slimy and drippy because it was covered in some demonic poison! I guess I wasn’t too far off… 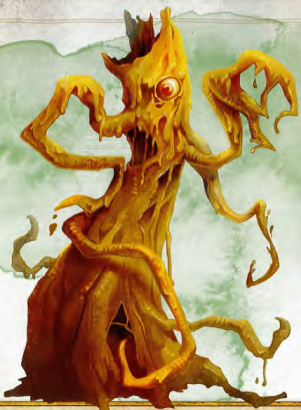 This is certainly a very creative design! Possibly the most distinct out of the entire demonic section! It’s horrifying, intimidating, and intriguing! In that respect, this design is an absolute win!

Unfortunately, it isn’t a very effective design. The hints are there if you really stretch; I guess the slimy body could sort of hint at its shapeshifting powers. Those limbs kind of look like spider legs, hinting at its secondary forms. But that’s if you already know the lore behind this creature and you stretch the imagination as far as it can go!

I can appreciate how creative this design is. It’s clear that the guys at Wizards of the Coast had a ton of fun drawing this thing! It may not be an especially effective design, sure. But I’d be a liar if I said it didn’t look cool!

Plus, it can make for a bizarre and creepy fight! Speaking of which!

Stats: The Hot Elf That Was a Tree is Now a Spider!

I think I accidentally just wrote a light novel title!

This thing is fairly intimidating in a few aspects. The AC is higher than average, making it a tad difficult to hit, and its HP is in the triple-digit zone. It has the typical demonic resistances on top of being immune to poison, which makes killing it a pain in the ass. This thing isn’t as bulky as a Tarasque, but it isn’t going to go down as easily as a Blight.

It also has some interesting abilities! With Spider Climb, the Yochlol can climb any surface without having to make an ability check, giving it free access to three-dimensional movement. It also has three spells, detect thoughts, web, and its most dangerous ability: dominate person. Finally, it has Web Walker, which allows it to move freely in webbing.

But none of those have anything on its trickiest ability: Mist Form. With this, the Yochlol transforms into a toxic mist. While in this form, it is completely immune to non-magical damage and has advantage on Strength, Dexterity, and Constitution saving throws. If it stops on top of another creature, it can force them to make a Con saving throw or become poisoned and incapacitated.

Attack wise, however, this thing is lacking in variety. However, it more than makes up for it with sheer numbers! It can attack twice per turn, slamming you in its base form or biting you in its spider form. If hit, this thing will be rolling 6(1d6+2) damage plus 21(6d6) poison damage. Which equates to, if both attacks hit, 14d6+4.

This thing could make for a really intense fight! Its shapeshifting ability could make it harder for the party, which encourages tactics beyond ‘hit it until it dies’. However, if handled poorly, it could very quickly become tedious and annoying for the players. So be sure to use its abilities carefully!

I’ll admit that I’ve been harsh the demons. There were a few strong ones here and there, but generally? I didn’t care much for the last fifteen monsters (Jesus Christ, I’ve been doing demons for that long?!). But hey, at least they left off on a bang!

The Yochlol is pretty cool! It’s not the greatest demon, but it is far from the worst! The lore is interesting, if a bit specific and limiting, the design is creative and cool, if a bit ineffective, and it has cool and creative abilities! It is pretty fun and neat, even if it’s split right down the middle!

With all that in mind, let’s but the Yochlol on the Best of the Bestiary!

With that, I’m finally done. My journey through the Abyss has been long and tiring. But now, it’s over at last. After months of crawling through the darkness, I finally get to step back out into the light!

Unfortunately, that isn’t sunlight. It’s a hellfire. Because now I’m going to be trapped in the Nine Hells for the next few weeks!