Okay, this is the last one. I’ll leave Dragon Ball alone for a while after this, I promise. Just bear with me for the next few weeks.

If you asked someone what their favorite arc of Dragon Ball Z is, it’s unlikely that any two people would have the same answer. Some would point to the Saiyan saga, citing the first clash between Goku and Vegeta. Others go to the Freeza saga and gush about Goku’s first Super Saiyan transformation. A good number of people would pick the Cell saga because of the myriad of incredible moments!

But very few people, if any, would look at you and say “My favorite was the Buu arc!”

I hesitate to say that the Buu arc is bad. There’s a ton of stuff in there! Fusion, Goku’s final Spirit Bomb, Majin Vegeta, Mr. Satan’s friendship with Buu, the list is huge! But the story itself is just so long, messy, and draining! It is still good, but it is easily the worst arc of DBZ!

Which is infuriating! Because it is so close to being amazing!

Today, I’m going to try my hand at it! I’m going to take the foundation Toriyama laid out and iron out as many of the flaws as I can while still being true to the original! My objective: make the Buu saga a consistent, satisfying story while changing as little as I possibly can! Let’s get started, shall we?!

The first few episodes of the Buu saga are widely criticized for a ton of reasons. Gohan’s shenanigans in high school as the Great Saiyaman, while enjoyable, does absolutely nothing in the grand scheme of things! You could skip these episodes and you’d miss basically nothing for the rest of the Buu saga! That is unacceptable for any story!

Excluding filler, I’d keep these episodes mostly the same. Gohan goes to high school, starts fighting crime in his Super Saiyan form, meets Videl, and takes up the identity of the Great Saiyaman. Videl eventually discovers his true identity and blackmails him into entering the World Martial Arts Tournament (which we shall refer to by its Japanese name, the Tenkaichi Budokai, because I’m a weeb). All of that is staying the same.

However, I would make a few cosmetic changes. After Gohan first takes up the Saiyaman identity, he and Videl start to run into some strangely powerful criminals. Each of them is marked by a strange symbol: an M on their foreheads. They run around with strange jars, attacking innocent people and sucking their Ki away. Gohan and Videl deal with them a few times, developing a close friendship as they do so. After a few episodes of investigating, they run into an especially powerful opponent: Pui Pui! 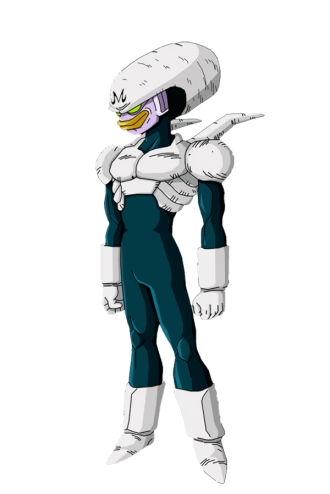 Yeah, remember this guy? Who was basically a nobody for Vegeta to kill? I’m gonna make him plot-relevant!

In their first scuttle with the M-marked super-criminals, both Gohan and Videl are capable of defeating them (though Videl has a much harder time of it). However, after thwarting too many of their mysterious plans, Pui Pui is sent in! He makes quick work of Videl, as you’d expect, which angers Gohan. Even still, Gohan finds himself struggling far more than he expected. He chalks it up to him being extremely powerful; but in truth, it is because Gohan has been slacking quite a bit in his training.

Keep that in mind. It’ll be important.

After managing to defeat Pui Pui, Gohan intends to try and interrogate him to find out who is sending these M-marked people to steal Ki. However, before he can, a mysterious spell kills the alien, keeping him from talking. Worse still, Gohan’s helmet is damaged in the fight, revealing his true identity to Videl.

From here, we get back on track with the original. Gohan goes to Bulma for a disguise that would work within Tournament guidelines (even more necessary, considering that his helmet is damaged). Vegeta, learning of the tournament, decides to join in. Then, calling in from Other World, Goku declares that he’ll be joining in too.

However, Goku isn’t coming back just for fun. He has an ulterior motive that he makes abundantly clear: he’s going to test Gohan. He explains that each enemy that appeared when he was alive was far more powerful than the last, which made training as hard as possible an absolute necessity. In his training, Goku has become far more powerful than he was before. So he wants to take this opportunity to see if Gohan can still protect the earth as he once did!

Gohan is confident that he can defeat his father. However, Vegeta takes one look at Gohan and figures out that he’s not ready. He correctly, and brutally, points out that he’s been slacking. To prove his point, he challenges Gohan to a sparring match with his son, the young Trunks. To Gohan’s shock and surprise, he is incapable of defeating the child. Vegeta has trained Trunks even harder than Goku had trained Gohan, making Trunks the youngest Super Saiyan to date. Without even knowing it, Vegeta’s son has far surpassed Gohan.

Realizing his mistake, Gohan goes to train with Goten in order to catch up. Again, we go back to the original. Gohan trains with Goten (who can’t go Super Saiyan in our version), teaches Videl how to fly (I’d personally take out her getting a haircut because pigtail Videl is better, but we’ll leave it in because it’s a good character moment) and heads off to the Tenkaichi Budokai. Goku arrives and has a heartwarming meeting with Goten, so on and so forth.

However, he does notice Gohan’s decrease in strength. This worries him greatly. But he decides to give him a chance in the tournament. Thus, the stage is set for the next act of the Buu saga!

Which we’ll get to next week! I’d love to reveal the rest of the rewrite right now! Unfortunately, the Buu saga is way too long and fixing it is just as time-consuming! I do have other things that I need to do, believe it or not! So I’ll be back next week with the next major chunk of my version of the Buu saga: the Tenkaichi Budokai!