It’s time to talk about the ultimate fodder monster for the demonic army. It’s time to discuss the Quasit.

The flavor text is virtually non-existent. The Quasit is a weak demon infesting the Lower Plane, plotting mischief to make up for their physical weakness. Demon lords will often use these monsters as spies. That, or they’ll make a pastime out of ripping them apart limb from limb.

There’s little you can do with that. If anything, this monster only serves as an introductory monster for a demonic-themed campaign. If you want to use it as an antagonist in a creative story? You’ll need to go look somewhere else.

But hey. At least it looks kinda cool.

Design: The Most Demonic of the Demons

This monster is the closest thing to a generic demon that we’ve discussed so far. There are a few creative liberties to make it stand out, but it does look very demonic! Just look at it! 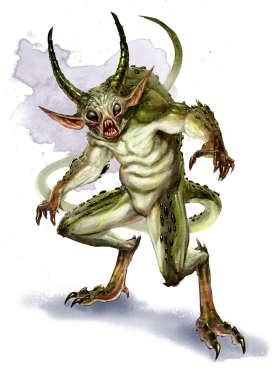 Unfortunately, the design isn’t all that effective. Sure, it does look fairly weak, but it looks more like a mindless brute than a conniving schemer!

And it certainly doesn’t do much to communicate its combative abilities. Nothing about this monster looks like a creature that can a) change its shape and b) turn invisible. The only hint at the poison in its melee attack is the creature’s green color scheme!

It does look cool! Unfortunately, the design does little to communicate what this thing is all about. It’s certainly creative and cool. But it is far from effective.

Stats: The Bottom of the Food Chain

Yeah, this thing is pretty pathetic. It’s ranked at a Challenge LVL 1 and it deserves it. However, I have to admit that there are a few abilities that this thing has to make it stand out. If it weren’t so easy to murder, then it would probably make for a very good and creative battle!

This thing has shit all for defenses. The AC is super easily beaten and the HP ranges from single-digit to super-low double-digit. It’s resistant to basically everything and immune to poison, which does make killing it a bit more time-consuming. But even with that, it is far from difficult.

In terms of damage output, it’s pretty pathetic. It can slash at you with its claws for 5(1d4+3) piercing. If the victim fails a DC 10 Con saving throw (not difficult at all) they take an extra 5(2d4) poison damage and become poisoned. It isn’t very hard to avoid the poison and the damage is pretty pathetic without it. Not even a first-level wizard would be that afraid.

Unless they roll a Nat 1. In which case, they’ll piss themselves at the table.

There are a few abilities that make this thing trickier to fight. It can transform into a bat, centipede, or toad, which can make hitting it a bit troublesome. Its scare ability can frighten its victims, making it easier to miss the low saves and AC. Then there is the invisibility, which does exactly what you think it does. All three of those abilities aren’t game-changing, but they can force the players to take on more creative tactics for success.

Or it will quickly become tedious. Like trying to hit a fly.

This monster is pretty sad. The flavor text is weak, the design is ineffective, and the stats make for a quick and boring or a slow and tedious battle for low-level players. There are a few minor positives in each category but none of them are enough to save it. This monster is boring and forgettable.

With all that in mind, let’s put the Quasit on the Best of the Bestiary!

Honestly, I feel like this thing should be lower on the list. If the monsters beneath it weren’t so boring and lame, it definitely would be closer to the bottom. Thankfully for it, it isn’t the lamest monster in the book!

Can’t wait for that to stop being a positive…