Demilich: Take Care of Your Bodies, Kids (Best of the Bestiary)

I, Acererak the Eternal, beckon you to your doom. Come, foolish ones, plunger my treasures, if you dare! Others have tried. All have failed! From your skin, tapestries shall be woven, and your bones will carpet my tomb! Only I am beyond Death’s reach. Only I know the secret to true immortality!
-Epitaph of a Demilich

Out of all the monsters in the Monster Manual, few embody the old saying ‘don’t judge a book by its cover’ quite like the Demilich does. When you look at its design, you think that it’s just another throw-away enemy that you’d see in a dungeon. A floating skull that could be killed within an instant.

But then you look at the stats. Then you realize that this thing is not a monster to be fucked with.

In terms of design, the Demilich may be one of the weakest in the book. The lore is only good for about one dungeon or an excuse for another phase to a long boss fight. The strongest aspect of the Demilich is easily its combat stats, both from the monster itself and the lair in which it lives. If you want a monster good for a challenging fight, this is most certainly the one. But if you want an interesting monster, either in terms of lore or design, you’ll be disappointed.

Lore: A Lich Gone to Rot

A Lich, despite being an undead creature, still needs to nurture its body. Should it neglect to do so, its bones all rot away into dust. Eventually, the entire body fades away, leaving only a floating skull. Thus, a Demilich is born.

Few Liches, unless extremely insane, seek to become a Demilich, for the floating skull is a mere shadow of the magnificent undead’s power. The spells they once knew fade from memory and it loses the body to channel magic with. To a sane Lich, becoming a Demilich is the closest thing to a nightmare they can still have. Nevertheless, a Demilich is still a powerful and deadly force of evil.

Even after this transformation, the Lich’s phylactery (essentially its core), still remains. So long as it does, death will elude the Demilich. After 1d10 days of being dead, the skull will reform and restore the Demilich to being. If it still has the presence of mind, a Demilich could use this to its advantage and feed on souls, eventually restoring it to the proper form of a true Lich.

A Demilich has an extremely fierce will to survive, likely carried over from it becoming a Lich in the first place. It needs no food, no air, and no sleep to keep going. So powerful is this will to live that the Demilich will always have the maximum number of hit points for its Hite Dice, rather than the normal average used for most monsters.

Which the lore writers apparently didn’t make clear to the stat writers, because players still need to add 80(20d4) together themselves. Was it really that hard just to put down 160?

There is some stuff you can do with this lore! Perhaps the players could be sent to dive into a tomb guarded by a Demilich! Or maybe you just want to be a really big asshole and have a Lich transform into a Demilich after the players finish a long boss fight! There isn’t much you can do with it. But there are possibilities!

So long as your high-level friends don’t mind diving into their seventh tomb level.

Well, I suppose it is in the season with Halloween and all that.

It’s a skull with jewels in its eyes. What the fuck do you want me to say here? I can’t even make a joke out of it! Just look at this thing! 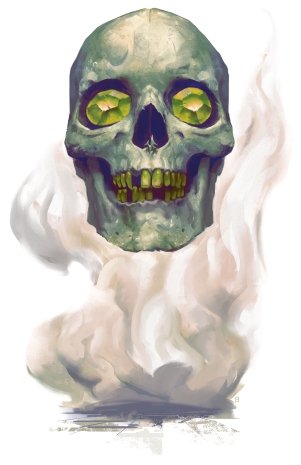 This design lacks everything that I look for in good monster designs. It totally lacks in creativity. You can’t gleam even a hint of its lore from looking at it. It’s hardly intimidating, creepy, awe-inspiring or memorable. It’s just a floating skull.

I have nothing else to say about the design. It’s bad. Moving on.

Stats: When the Monster and the World Kill You

Holy fuck this thing is scary! Not only does it have the aforementioned 160 HP, but it has a terrifying 20 AC! Worse yet, it is resistant to all forms of melee attacks (so long as they’re magical), and completely immune to normal weapons, as well as necrotic, poison, and psychic damage! And, in case the list of immunities wasn’t high enough already, it is completely invincible to all condition effects! If you want to kill this thing, you’d best have high modifiers and high rolls! Even a high-level party would struggle against this thing!

But wait! There’s more! This thing has Avoidance, an ability that allows it to weaken most spells that force a saving throw. Do you have a wizard that’s super dependant on spells like Fireball or Lightning Bolt? Throw one of these things at him! If a Demilich fails a saving throw, it only takes half damage. If it succeeds, it takes none.

And did I mention the Legendary Resistance? The ability that allows it to straight-up choose to succeed a saving throw? Which it can do three times a day?

Killing this thing is far from easy. But it doesn’t have much of a hard time killing you!

Oh yeah, by the way: it also has three Legendary Actions. With these, it can use fly up in the air, blind everyone with Cloud of Dust, drain more HP with the slightly weaker Energy Drain power, or use up all three Legendary Actions to use Vile Curse, cursing one target with disadvantage on all attack rolls or saving throws.

And then there’s the Lair. Yes, the Demilich’s fucking house can kill you! At the top of each round, the tomb can cause a certain effect from a list that can affect the flow of combat. These include:

If you want to kill a Demilich, you need to be creative! If you don’t employ good tactics (and good rolls), the monster’s various abilities and the lair’s numerous effects will undoubtedly fuck you over! If you can’t cover your party’s various weaknesses that these effects will all induce, you are in for a bad time!

Now, a bit of advice for DMs: be careful using this thing! If you aren’t cautious in your use of the Demilich’s abilities, the fight could very easily go from ‘creative and intense’ to ‘tedious and annoying’. If your players are rolling low and you’re rolling high, feel free to do a bit of fudging. Otherwise, this will stop being fun really quickly.

The Demilich is a middling monster. Its various stats and abilities could make for an incredibly challenging and fun battle if used correctly! The lore is good, but not great. But neither of those can make up for the monster’s incredibly boring design!

With all that in mind, let’s put the Demilich on the Best of the Bestiary!

I’m tempted to put this thing lower on the list because of that design. It’s legitimately one of the most disappointing monsters in the book in that regard. But it is saved thanks to its decent lore and incredible combat potential.

Now, with the Demilich out of the way, we can begin climbing the highest mountain in the entire Monster Manual! Ladies and gentlemen, it’s finally time to talk about the largest catalog of monsters in the book! Next week, we’re diving into Demons and Devils!

We’re gonna be here for a while…