If you dig deep into Crunchyroll’s vast catalog of anime, you can find several diamonds in the rough. Most of which I didn’t know were even there! ‘Samurai Pizza Cats’, the various parts of Lupin the 3rd, ‘Mushi-Shi’, ‘Ghost Stories’ (including the fantastic English dub!), ‘Cardcaptor Sakura’ and more are waiting in the website’s depths. Sure, you need to dig through a lot of shows to get to them (of greatly varying quality). But those gems are absolutely worth mining for!

Among all of them, there is one that I frequently come back to. One that never fails me if I need a good laugh. A show that has forever set my standards for comedy anime. And that show is ‘Monthly Girls’ Nozaki-Kun’!

I have watched this show several times now and it still makes me laugh! It perfectly blends verbal and visual comedy together to create the most hysterical anime that I have ever seen! Out of all the underappreciated shows that I desperately wish to return, this one is among the top of the list!

Plot: Falling For a Brick

Breaking down the plot for this show is a bit challenging. Each episode has its own plot, most of which have effects on plots from later on in the series. The framework that holds them all together is exceptionally simple.

Chiyo Sakura is much like most high school girls in anime: short, cute, and madly in love. The subject of her affections: Nozaki Umetaro, a tall and handsome former basketball player and secret mangaka behind a popular romantic manga! Unfortunately for Chiyo, she has one major roadblock stopping her from her romantic dreams: Nozaki-Kun is an idiot. Together, the two and their friends get into various hilarious escapades in their pursuits of knowledge, academic achievement, and love!

In terms of character development or world-changing events, this show is… lacking. As in they don’t exist. None of the characters change due to the events of the episode. Sure, the events of one episode may be brought back up in future episodes for the sake of more jokes. But nothing will ever truly change. Chiyo will never get Nozaki to love her.

As much as I desperately want that to happen. I don’t think I’ve ever seen an anime pairing so perfect for one another.

That being said, this isn’t a bad story. Because each and every character is perfect! From their designs to their personality, everything about them is amazing and hilarious!

Their designs are simple, memorable, distinct and incredibly effective. Each one sets an expectation with their looks, then subverts them for the sake of wonderful, and always hilarious, comedy! Their chemistry with each member of the cast is fantastic, with every interaction between them bringing out some truly phenomenal written comedy!

From Mikoshiba’s beauty hiding the awkward otaku to Seo’s reckless and violent antics concealing the utter enchantment of her singing abilities, every character has enough depth to make them interesting. Plus, they’re all just so likable! Even the hatable Maeno and his obsession with Tanukis have managed to worm their way into my heart!

Although it is worth noting that Maeno is legitimately my worst nightmare as a writer.

Now, it is worth noting that this show can be a tad repetitive at times. Most of the show’s jokes have a simple formula: setup, buildup, subversion, and punchline. If the show wants to go for a more emotional moment, it will drop the subversion and bask in the romance of the moment.

So the show will sometimes subvert the subversion to truly subvert the audience’s expectations. Neat, huh?

‘Monthly Girls’ Nozaki-Kun’ doesn’t set out to tell an amazing story rich with character development. It sets out with one simple goal: make the audience laugh. Sometimes it will spice things up by giving us a genuinely romantic and heart-warming moment. But ninety-five percent of this show is meant to give you a good belly laugh and lighten your day.

And good God is it good at that!

Visuals: Manga, Anime and the Colors Between

Holy shit this show is gorgeous! It’s bright and colorful, which perfectly fits the fun and lighthearted tone! The animation is never mind-blowing, although there are a lot of really nice looking shots.

The animation clearly cuts a lot of corners. Characters will maintain the same poses for several seconds at a time per-shot or simply shift between three or four poses to express their current emotion. These work well for simple visual gags, though most of the punchlines are given more animation. Limited, yes. But effective and often very funny!

There are also several scenes that take place in Nozaki’s manga. These drawings are actually really nice! They’re reminiscent of classic Shojo manga, such as ‘Fruits Basket’. Even the paneling is pretty nice, albeit simplistic! They’re very different from the rest of the show in terms of style, so they’re a nice change of pace when needed.

Plus, they’re often the stars of the funniest scenes in the show.

There’s a manga within the anime based on a manga. Good God, I love this shit!

There are very few anime that I would describe as genuinely hilarious. Often times, the comedy in the series boils down to ‘character does a silly thing’ or ‘character makes a silly face’. Most of the time, it’s just a bit of seasoning on top of a Shojo or Shounen. Few shows can achieve that balance.

‘Hinamatsuri’. ‘Kaguya-Sama: Love is War’. The English dub of ‘Ghost Stories’. All of these are fantastic examples of comedy anime. They are masters of timing, setup, and subversions! I love them all to death. But among all of them, one show stands supreme.

And that show is ‘Monthly Girls’ Nozaki-Kun’! 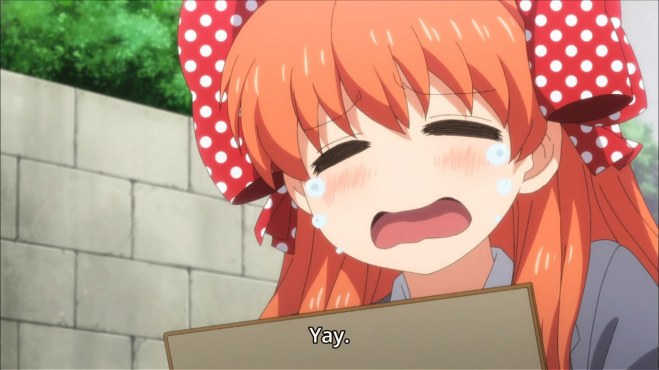 I would highly recommend this show! It is sweet enough to satiate the romantic inside me! It’s hilarious enough to leave me breathless every time! This is among my favorite anime of all time and it is easily my favorite comedy! It is truly spectacular!

Which can only mean that it will never get another season. Because few truly great anime ever get a follow-up.