Trevor Belmont: The Vampire-Slaying Drunk (The Mind of a Character)

*Note: I’ll be talking exclusively about the animated series version in this post. I love Trevor from the games, but I find the show’s take on him to be more interesting and likable. Don’t be mad at me, game fans!*

Trevor Belmont falls into one of my favorite categories of character: the reluctant hero. It isn’t until the end of the first season that Trevor wants to take part in anything regarding monster-slaying or world-saving. He’s tired, rude, skilled, majorly alcoholic, and incredibly sad. Out of all the lovable characters within the Castlevania animated series, Trevor is easily one of the most interesting!

Don’t worry. I’ll get to Dracula another day. And my husbando Alucard sometime after that. Then Sypha. Maybe Isaac and Hector later.

I’ll get around to all of them eventually.

The Wound: A Family Disgraced

Once, before the series started, the Belmont family was a well-respected noble family of monster slayers. They carried on for generations, protecting everyone from the creatures of the night. Trevor Belmont was, for a few years, happily raised within this family. He played in the trees (one, specifically), practicing with his whip and learning how to slay the monsters of the night.

Until the world turned on the Belmonts and burned their estate down.

Since then, Trevor has been living on the run. Not just from those who hate him, but from his family and their legacy. He tries (unsuccessfully) to leave his family behind. Unfortunately, his methods for doing so involves a lot of… well…

The Lie: Drink the Pain Away

Trevor’s lie can be boiled down to alcoholism. I mean, for god’s sake, his introductory scene takes place in a bar!

He wants to drink his suffering away. He thinks that, now that his family is gone, all he can do is forget and move on. Maybe, if he’s lucky, he’ll be able to drink all of his problems away.

Unfortunately: alcohol doesn’t do that. Here’s a little bit of life advice: booze won’t fix your problems. Sure, being drunk may feel great at the moment. But it’s about as good of a long-term solution as simply killing yourself would be.

But then he met a girl that changed everything.

The Want: A Legacy Upheld

While Trevor does try to drown his family’s woes away, he just can’t help himself. He is, whether he likes it or not, a Belmont. And if he doesn’t redeem his family name, then no one ever will.

In the first season, Trevor doesn’t really have a goal. He just wants to wander around, get drunk and survive until he can’t anymore. Then, after meeting Sypha and the other Speakers, he finally starts to find himself again. He realizes what he wants to do.

A Belmont is a Belmont. And a Belmont fights the creatures of the night.

Dracula wants to wipe out all of humanity. Trevor wants to stop him. He wants to fulfill his family’s ancient quest, destroy the king of the vampires and end the war he wages. Whether it will restore his family’s honor, he does not know. But it’s better than dying in a pool of his own piss.

The Need: Alone No More

However, like many protagonists, he can’t do it alone. If he were to even attempt it, he’d likely just end up dead. Or worse: he’d go back to his old ways and end up a drunkard again. He can’t do that again, no matter what else happens.

This is where Sypha and Alucard come in. Without Sypha, he’d either go back to being a drunk or never have left in the first place. And without Alucard, as much as he claims to hate the half-vampiric fuck-stick, he can’t possibly fight the hordes of the night without him.

It is very anime and cliche, yes. But in this case, it actually works super well for one particular reason. It creates a strong parallel with the series antagonist: Dracula.

Much like Trevor, Dracula is driven by a strong loss in his past. After his wife was burned at the stake, he began to lose his mind. His son, Alucard, tried to be there for him, but it was already far too late to stop him. Dracula pushed everyone that could help him away, keeping only those who could further assist him in his murderous ambitions. Then, in the end, the Lord of the Night sends them away in a final act of mercy.

Trevor even realizes this at the end of the second season. Sypha convinces him to come with her to find her people, then continue on with their quest of slaying the creatures of the night. He doesn’t agree because he’s a warrior that thursts for improvement, like other protagonists in the genre do. He agrees because he knows that he needs Sypha with him. 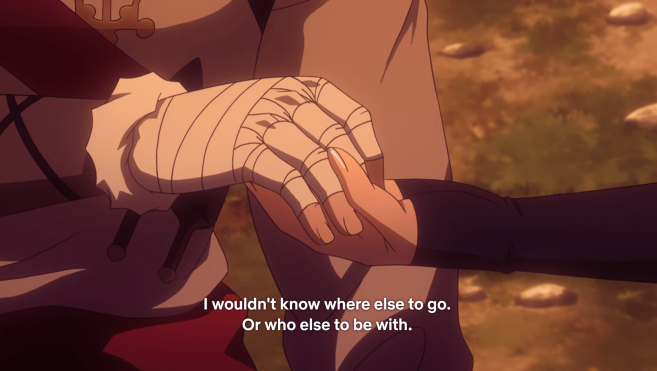 As I said at the beginning, there is a huge catalog of characters in this show that I love! There are characters that make me laugh, make me cry, make me woop in excitement, or get my creative gears turning! But out of all of them, only Trevor can do all four!

I can’t wait to see where the show goes in the third season (whenever that comes along; so long as it’s good, I can wait another decade) takes these characters next. Part of me hopes that they’ll take the anthology route, just like the games did. But the other part of me doesn’t want to let go of all these characters! I want to see Trevor, Sypha, and Alucard going on more adventures together!

Unless it’s this boss fight from Symphony of the Night. I don’t think I can handle that emotionally.

But an animated adaptation of Rondo of Blood, then Symphony of the Night… I cannot deny, that sounds damn tempting!