As the title states, this is the second part of my Xenoblade Chronicles review. If you want to know why it’s in multiple parts, why I’m reviewing it, or my thoughts on the story, then check out part one.

Visuals: The Finest the Wii Had to Offer

That may not sound like much. But to be fair, for a Wii game of this scope, it is still impressive! Even if it does sorely need the HD treatment that it’s going to get.

Xenoblade Chronicles is a mixed bag in terms of its graphical presentation. While the environments and monsters still look pretty great, the same can’t be said for the character models. Looking at this game can either be an incredible treat or an absolute nightmare! 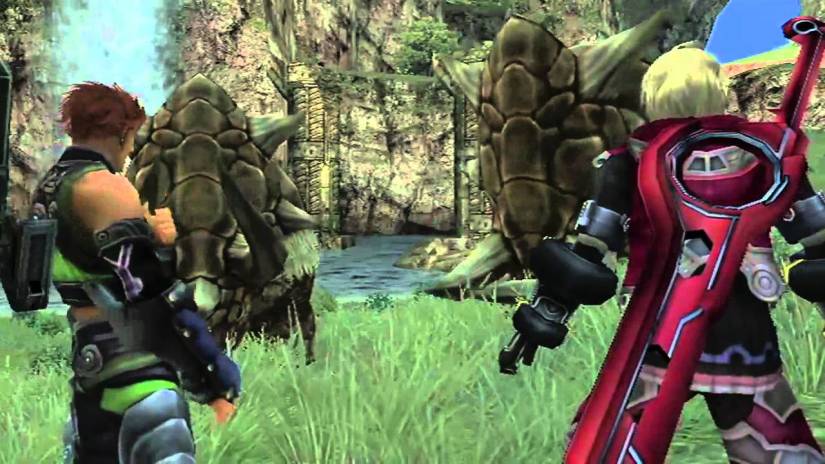 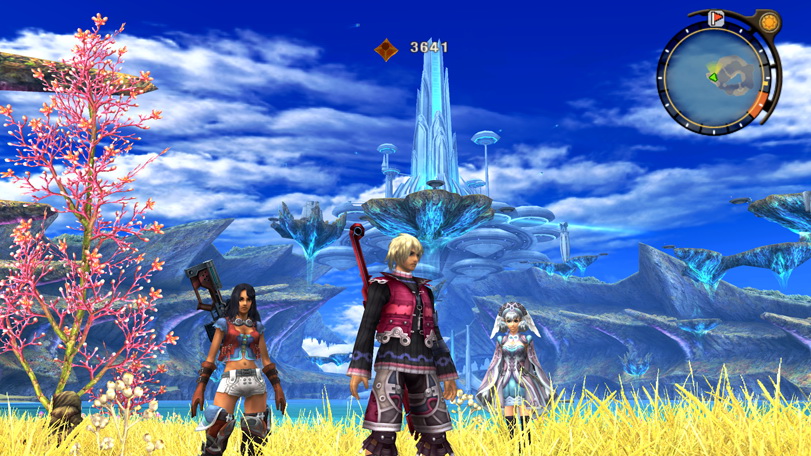 The game’s performance is also mixed. Most of the time, it runs at a decently smooth thirty fps. But when the action gets really hectic, the frames do tend to drop. This is a rare occurrence, but it is worth noting that it does happen. As it stands, the performance is a mixed bag.

But do you know what isn’t a mixed bag? The music!

If you’ve been with me for a long time, then you know that good music is important to me. If the music is great, I can be much more forgiving of a less-than-stellar experience. However, if the music is terrible, it can greatly detract from a piece of art, even if the rest of it is spectacular!

Luckily, Xenoblade Chronicles isn’t hurt at all by its OST. In fact, it is easily the best part of the game! Each track is absolutely beautiful, whether they be dramatic, exhilarating, or even joyful!

Y’know how there’s always that one track that you always want to skip. Even the best OSTs have tracks that just aren’t that interesting. Xenoblade Chronicles says “Nah.” and provides one of the best collections of tracks ever! There isn’t one track that lags behind the others! Each one is absolutely incredible!

The visuals sit nicely at a 75% positive. The character models haven’t aged well and the frames do tend to drop at times. But the environments are so nice and the music is so good that it more than balances itself out! It is a very appealing game, especially for one on the Wii!

I hope you’ve got some time on your hands because this one is going to take a while!

At its core, Xenoblade Chronicles is a very traditional real-time RPG. You pick your party of characters out of a diverse cast, equip them with their own specialized gear and abilities, then set out! You pick up quests from NPCs to kill the time, murder monsters to get stronger, and make your way through the world’s vast assortment of areas on your way to the end of the game.

It’s in the finer details where this game carves out its own identity.

The combat in Xenoblade is incredibly deep, challenging and fun! Each character has a decent catalog of abilities to use in a fight, which can be freely customized and upgraded to the player’s liking. These abilities play off of those used by the various party members in different ways. This leads to each individual character having a huge amount of combo potential.

Which is made even more incredible when you start chaining them together!

With proper timing, execution, and placement, you can enter a chained combo attack with your entire party. If you properly time all the quick time events, which quickly become faster and faster, then you can further chain the attacks to an insane degree, dealing tons of damage. However, not all moves can properly combo into other moves while in this state, so you’ll need to experiment to find the longest combo possible with your chosen party of three.

The game has a huge variety of enemies, which requires different strategies. Some enemies are immune to certain types of damage, which can make certain characters and their gear essential or useless. This mechanic makes every member of the party useful, as not everyone is as useful for certain situations as others. Or, if you really don’t want to remove your favorite character from the party, you can give them special gear to make up for their shortcomings. For example, only Shulk can damage Mechon (though he can give a momentary buff that lets everyone else do the same), but everyone has special equipment that lets them damage Mechon, even if it isn’t as strong as their normal weapons.

There are also a lot of sidequests to do to increase your experience and funds. Most of them boil down to ‘kill this number of this specific monster’ or ‘gather this much of this material’. But there are a few that are less mundane, such as the game-long ‘Rebuild Colony 6’ quest. If you need a break from the main story, these quests do the job quite well!

There are also various in-game moments that build the connection between the characters! If you work with the same party for long enough, they’ll start to build a strong connection, which increases their cooperative abilities in combat. Plus, you gain access to character dialogues that are scattered all throughout the world. These moments are very sweet and satisfying on top of building the characters and their relationships wonderfully!

There’s also a huge amount of customization outside of the character’s abilities! Each piece of armor has its own look on top of its stats. This is a double-edged sword. On one hand, it goes a long way in helping the player feel involved and attached, as they find that one piece of gear that looks incredible on top of being better than everything they had. On the other, it sucks like nothing else when you need to replace a piece of gear you like with a literal swimsuit!

The world of Xenoblade is also absolutely incredible! Each level is unique and a ton of fun to explore. They’re filled with monsters of various power levels, which makes the world feel that more alive. Plus, it is incredibly satisfying to go back and kill that giant super-monster that you saw running around earlier when you get to the higher levels!

If you’re looking for a game that will take your time, this is one of the best picks there is! The main story is about seventy hours, which is good enough on its own! But with all the side content? You’ve got a game that will easily last a few hundred! This is a long game!

Now, I do need to clarify: this game’s controls are a little rough, depending on your controller. If you’re playing with the classic controller, you’re all good. But playing with the Wii remote and Nunchuk? It takes a game that is absurdly fun and addictive and turns it into an infuriating slog, as you need to wrestle with your own hands to properly navigate all the menus!

Hopefully, that won’t be an issue come time for the HD remaster.

This game is a fantastic time killer! Combat is challenging, quick and addictive, the world is vast and interesting to explore, there are a ton of customization options, and the amount of content is huge! However, it does suffer from some control issues on the Wii version depending on what you have, and it does suffer from the repetitive nature that most RPGs are intrinsically linked to.

If you don’t like RPGs, you won’t like Xenoblade. But if you love long adventures, even if they are a bit repetitive? Then this game is a perfect choice!

Xenoblade Chronicles is an absolutely incredible game. Nothing in it is completely flawless (save the music, which is the best in any video game ever), but they are all so good that it’s easy to overlook the flaws! It is a beautiful, emotional and thrilling game from beginning to end!’

In case it wasn’t obvious, I love this game to death! I’d highly recommend playing it, especially if you’re a fan of good RPGs! Whether you want to search out a copy on the Wii, make do with the 3DS port or wait for the Switch remaster, I implore you: play this game! I assure you, you won’t regret it!

And if you were one of the many people that hated Xenoblade Chronicles 2, then I’d still recommend giving the first one a chance! It is a very different game from the sequel in many ways. Mainly because the English voice cast doesn’t immediately make you want to kill yourself.

Now, if you’ll excuse me, I need to go re-complete this one and Xenoblade Chronicles X. I need to be fully prepared for next year!