This was honestly pretty disappointing. Sure, there were a few announcements that made me really happy, but there were just as many that made me shake my head and wonder: why?

Let’s get the worst one right out of the way: Nintendo Switch Online. From the looks of it, we’re getting what we pay for: a low quality online service that will likely suffer from the same issues the current online gameplay does. But now you need to pay $20 a year.

There were also some hardware bundle announcements that were really lame, like the Let’s Go! Pokemon bundles and the Smash Bundle. Neither of these really stood out, and both of them look really underwhelming. Plus… come on Nintendo; we already knew about these. Don’t waste our time telling us stuff we already know.

Now don’t get me wrong: it wasn’t a bad Direct. There were plenty of things that caught me off guard. For example, the very first announcement they made: Luigi’s Mansion 3 on Nintendo Switch.

Okay. I can definitely say I didn’t see that one coming. And that’s one of the less surprising reveals.

We later got a trailer for a new Gamefreak game, currently titled ‘Town’. It looks cute enough, but I haven’t seen nearly enough to be interested. Still, it does look like it could be a fun time.

Along with that, we got a port for Super Mario Bros Wii U, a 3DS port of Kirby’s Epic Yarn, some Yokai Watch shit (do people still play that?) a title and gameplay for that new Yoshi game (which is the only thing I got right from my prediction list), and my two favorites: a port of the first Katamari Damacy and several Final Fantasy ports, which include Crystal Chronicles, 12 Zodiac Age, 10/10-2 HD, 9 and 7.

And I fucking love Final Fantasy 7, so you can bet that I was a fucking happy boy.

We also got some more details for other things, mostly updates to games that are already out. We got some more gameplay for Super Mario Party, Daemon X Machina (it’s a giant robot piloting game, so I’m kind of interested) some classic Capcom beat-em-ups are getting ported in a collection, and some other things that I didn’t care enough about to remember.

Then, when it all came to an end, we got two new announcements.

And Isabelle is going to be playable in Smash Ultimate. 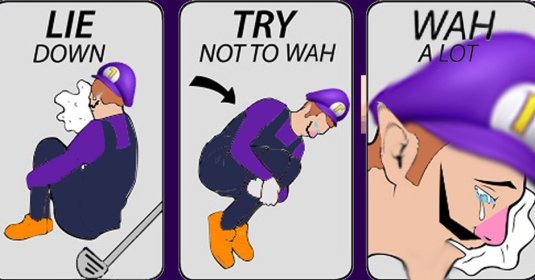 Fucking seriously, guys? Who wanted this? Who asked for this? I demand to know. Are we going to get every god damn character except for Waluigi? This isn’t even funny, anymore. It’s just fucking mean.

I guess it’s a good day to be an Animal Crossing fan.

Now, if you’ll excuse me: I, the Metroid fan, must go into the fucking corner and cry. Again.

This was an okay Direct. Some of the stuff was really cool, with the highlights being Luigi’s Mansion 3, Katamari and the Final Fantasy ports (and Animal Crossing, though I haven’t cared about those a whole lot since the Gamecube version). But again, I must ask:

Who the fuck actually wanted Isabelle in Smash?! I thought it was a god damn joke! HOW LONG WILL WALUIGI NEED TO SUFFER THIS CRUEL INJUSTICE BEFORE HE’S A PLAYABLE FUCKING CHARACTER?!