Cartoons are a big part of most people’s childhoods. Everyone had their favorite: Transformers, TMNT, My Little Pony, The Clone Wars, the Rugrats, Hey Arnold, Invader Zim, the Powerpuff Girls, or even anime like Dragon Ball Z, Yu-Gi-Oh or Pokemon. If I tried to list them all, I’d be here for roughly a thousand hours, and this post would be well over a billion words long.

As a kid, nothing made me more excited than waking up on a Saturday morning, turning on the TV and wondering “What’s my favorite super hero going to get into now?” They provided the most thrilling adventures, with the most amazing villains and brutal battles put to children’s TV. I watched many of these as a kid, but there are only three that stick with me to this day.

The first is so obvious that I feel I shouldn’t even go into it: Batman The Animated Series.

Do I really need to tell you why? It’s the best comic book cartoon ever made. To tell you why would be a redundant waste of both of our time. So instead of that, I’m just going to move onto the next one I loved back in my youth.

One that doesn’t hold up as well as Batman does. The X-Men Animated Series.

This is the most 90’s cartoon I’ve ever seen. From it’s stiffly animated characters to it’s cheesy voice acting and dialogue, this show simply screams “HEY! I’M NEARLY 30 YEARS OLD NOW!!” Going back to it now is a challenge.

One that I’ll gladly take.

I love the X-Men. To this day I still do, even though their prime is long since gone. So naturally I had to watch this show when I was younger. And good god, I loved this shit! I can still remember all of the scenes featuring Wolverine screaming, and sometimes I’ll remember one of his goofy one-liners and chuckle to myself. Seriously, whenever I see a convertible in my day to day life, I can’t help but hear his voice growl “Hey Cyclops…” in the back of my mind.

Has time treated it well? Fuck no. But re-watching it fills me with a simple childlike joy. If I’m ever having a bad day, I just boot up a few episodes from this and feel all of my sorrows melt away.

The same nostalgia-goggled bias can be applied to the last of the shows on my list, and my favorite comic book cartoon of all time: 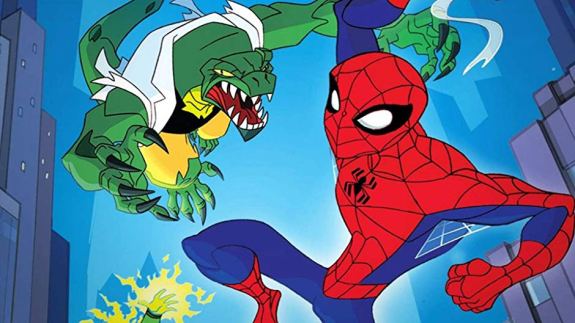 Watching this show as a child was a challenge. Not due to it’s quality, but due to my own personal life. My parents had signed me up for a junior baseball team right as the series had started, and the team’s practice sessions would always happen right as the episode would begin.

Meaning that I missed every god damn episode. I hate baseball to this day because of this.

But now that I’m an adult with a disposable income and a schedule completely within my control, I could and did watch the entire show and give the child inside me what he’s always wanted. And I absolutely love this show.

I feel I’ve made my love for Spider-Man perfectly clear in the past. I’ve read many of his comics, watched all of his live-action movies (unfortunately) and played a ton of his different games (friendly reminder that a full review of the new Spider-Man game on PS4 is coming in December after the last DLC pack comes out). But this show is the one that’s stuck with me the strongest over the years.

Everything here feels so… well, Spider-Man. The characters, the writing, the art style, everything feels perfectly crafted to feel like a Spider-Man comic. This is a surprisingly fantastic show, and not just because I’m biased towards anything Spider-Man.

Even though I totally am.

I could add a few more shows to the list, but I don’t feel as strongly about any of those as I do these three. I simply adore all three of these, and these characters are my favorite in all of comic books because of these shows. I will always be willing to re-watch any of these shows, whether I’m doing so to relax or I’m showing them to someone who has never seen it before.