So… talking about Shin Godzilla yesterday was so much fun that I’m going to keep going. By talking about the original Godzilla. And every one afterwards.

Yeah, so… expect the next thirty or so daily posts to just be me rambling about a specific Godzilla movie. If you have a problem with that, I’m sorry. But this giant monster kick just won’t go away, and I need something to watch every day.

Yes, even the bad ones.

We’re beginning our new marathon with the one that started them all: Gojira. Or as it was known in the states, Godzilla: The King of the Monsters.

Quick note, we’ll be viewing each of these films in their original Japanese forms. While many of the English dubs are hilarious, a lot of them do kind of butcher the films in different ways. For example, in Mothra VS Godzilla, they called Mothra ‘The Thing’ instead of it’s real name. Or how in Godzilla Raids Again, they made the movie boring.

Like, really boring. But we’ll get to that tomorrow.

This movie is a classic. While I do greatly enjoy many movies from the fifties, sixties and seventies, few come even close to this movie on my personal scale.

To put it simply, I love this movie. I have since I was a little kid. And all because of one shot. 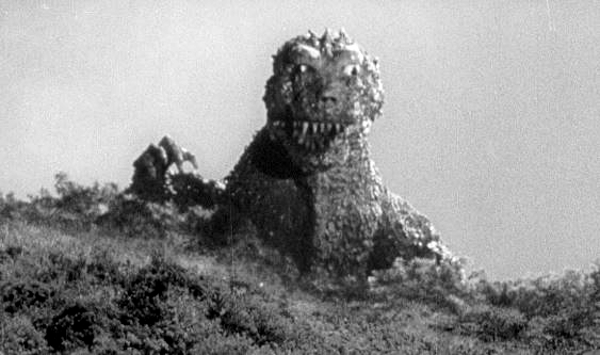 As an adult living in 2018, I can’t help but laugh at this shot. Especially because in-universe, it looked like this: 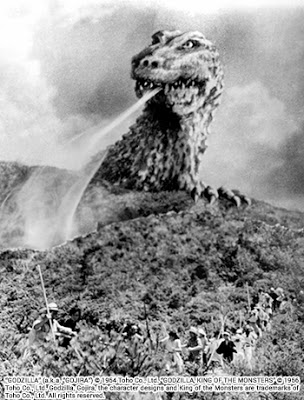 Time has not treated it kindly. But as a small child who had never seen anything like it, this blew my mind.

This wasn’t the only impressive thing in the movie, though. Not only was it a perfectly timed metaphor for the nuclear bombs dropped on Hiroshima and Nagasaki, but the special effects (at least for a film in 1954) were mind-blowing. Remember, before this movie, giant monster movies were stop motion animated. This movie changed the scene by having a guy in a rubber suit (which was like being stuck in a walking coffin, poor guy) and small destructible sets.

Fun fact, this movie looked so real that one Japanese theater became panicked and ran away when their theater started shaking during a minor earthquake. They were all terrified that Godzilla was stomping around outside. That’s how convincing this movie was.

Plus, it does what my favorite Godzilla movies do: it takes the monster seriously.

In this movie, Godzilla is a gigantic living and breathing metaphor for nuclear destruction. As such, it struck home super hard with Japanese audiences and it needed to be heavily altered in the American release.

Which is why we don’t like the American release on this blog.

Granted, they don’t go as far as Shin Godzilla. Whereas Shin Godzilla explored both the physical and psychological effects of Godzilla’s existence, this movie focuses more on the physical consequences of his existence. We see him lay complete waste to Tokyo, as well as the Japanese military.

Plus, the metaphor was very different. Whereas Shin acknowledged that nuclear technology is something we’ll never be rid of and that we should learn to live with it, the original Godzilla preaches the cancellation of nuclear use as a whole. Granted, they do so very powerfully with a single, bone chilling line from Dr. Kyohei Yamane:

“I can’t believe that Godzilla was the only surviving member of its species… But if we continue conducting nuclear tests, it’s possible that another Godzilla might appear somewhere in the world again.”

It’s almost like they knew it was going to become a franchise.

That’s not the only chilling thing, either. Even the little details in this movie are crafted to be symbolic of Little Boy and Fat Man. For example, Godzilla’s skin is twisted and ragged, which is a reference to the same radiation scarring that the survivors of the bombing suffered from. This is a terrifying and subtle detail that wouldn’t return until Shin Godzilla.

Then there’s the destruction, the children’s choir, the radiation testing, hell even Serizawa’s Oxygen Destroyer are all subtle nods to the new weapons of mass destruction rising in the world at the time. Put simply, this movie is really smart.

Again, I could go on and on for hours. But I do have to continue watching through the movies for the following days, so that’ll have to wait for another day. I’ll just wrap it up the same way I did with yesterday’s post.